This was my fourth time doing this particular CRS race – I haven’t toed the line here since 2009 when I had a horrendous race and haven’t had a chance to redeem myself here since as I’ve been busy on the weekend that the race has fallen on.

Training has been going pretty well as I’m gearing up for the Toronto Women’s Half Marathon in May, but just training can be boring and I needed to know where I was in my progression and this race was just the place to start and get my bearings.

The Husband and I got up “early” (in his words) and headed to High Park on the TTC. Race kit pick up was fast and we had about 40 minutes to kill before the start. 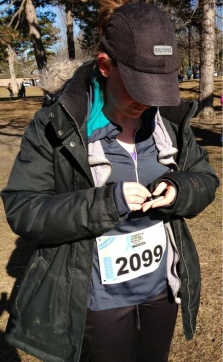 Lining up in the Blue Corral, I couldn’t find my friend who was also doing the race, but I liked the chit chat from the people around me and the topic of conversation as always at this event was Spring Hill at the finish.  Glad that someone reminded me that there was a hill at 3km – would have been a not so great surprise when I turned the corner and saw it.

It felt like I slowed quite a bit between 6-7, but since I negative split the race it couldn’t have been that bad.

Spring Hill Road didn’t feel that bad or at least no where near as bad as I remembered, because in my head, the hill seemed to last forever.  Maybe doing actual hill repeats in training actually helps – who would have thought?  I felt stronger than I felt during last years races, which motivates me even more.

Next up, Toronto Yonge Street 10km!

This entry was posted in Uncategorized and tagged harry's spring run off, race reports, running. Bookmark the permalink.